Several former high-ranking officials at the Interior Ministry were involved in land scams in Phuket and Phangnga provinces, the Office of the Public Sector Anti-Corruption Commission has found.PACC chief Pol Col Dusadee Arayuwuthi said the officials were involved in the misappropriation of more than 100 public land plots in the two provinces. 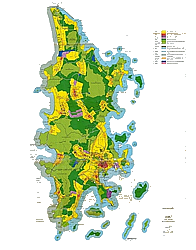 Mr Dusadee said the officials hoped to push for the issuance of land title deeds for the plots at a later date. A team of PACC investigators inspected more than 1,000 rai of national reserve forests and coastal areas in the two provinces and found more than 100 cases in which public land had been encroached upon. The agency also found that in every public land encroachment case, state officials were involved, he said.

The PACC has drawn up a list of suspected public land encroachers following its probe.

"One suspect involved in two plots of land is a former Phuket governor. Another is the daughter of a former permanent secretary to the Interior Ministry," Pol Col Dusadee said.

The PACC's revelation came after the Ombudsman aired concerns on Monday over the level of land ownership by foreigners via Thai nominees. Most of the land in foreigners' hands is in coastal resort areas.

Pol Col Dusadee said that in Phuket's Krathu district, several investors have invaded reserved forest land in the Kamala Mountain Range, while land in tambon Kamala is being sold at 200 million baht per rai at the moment.

Some have tried to push for the issuance of an ownership document for a 21-rai plot in the area. A beach-front hotel worth 4 billion baht is under construction on the plot, he said.

Another group recently tried to secure a land ownership document for 45 rai of land in Khao Nakkerd forest reserve in Phuket.

Pol Col Dusadee said he would consult with senior officers to try to block the issuance of the ownership document for the land plot.

He said in many public land encroachment cases, foreigners have hired Thais as nominees and set up companies to purchase land in coastal provinces, such as in Chon Buri's Bang Lamung district and Pattaya city, and in Rayong province.

In Phuket and Phangnga, it was found that almost 70% of forest areas have been encroached on.

Problems in these two provinces are similar to what has happened in Surat Thani's Koh Samui, where most landowners are registered companies in which shareholders are Thai nominees of foreign investors.

"It is not difficult to trace connections among land owners. Companies set up with nominee shareholders do not have continuous business activities. Most such companies suffer financial losses every year," Pol Col Dusadee said.

A former deputy governor of Phuket and a daughter of a former permanent secretary of the Interior Ministry have illegally acquired land plots in a forest reserve in the province, the Public Sector Anti Corruption Commission (PACC) said yesterday.

Between them, the two unnamed persons now own three land plots totalling 45 rai in areas adjacent to the Kamala mountain range. Another 260 rai in 18 plots were to be given to them at a future date under various documents, PACC directorgeneral Dussadee Arayawuth told a Phuket press conference. Land encroachment and illegal land acquisition in Phuket have been widespread and often assisted by corrupt land and forestry officials, he said.

The 2004 tsunami caused high demand for land on mountainside areas for use as tourist resorts, he explained. The land law forbids the full transfer of ownership of land on an island, and another law requires occupants of such land to engage in farming. Both legal conditions were violated in this case, Dussadee said.

News PHUKET : An initial probe into a land scandal in Phuket found ownership documents and title deeds for four plots in Kathu district had been unlawfully issued by corrupt officials.

Permanent secretary for Natural Resources and Environment Chote Trachu and Pol Col Dusadee Arayuwuthi, head of the Office of the Public Sector Anti-Corruption Commission (PACC), yesterday inspected the land and the issuing of documents in Phuket.

They found irregularities in four plots in tambon Kamala of Kathu district. Authorities involved in the document issuance complied with rules drawn up by several agencies, including Lands and Forest departments, the report said. Pol Col Dusadee said any unlawfully occupied plots would be reclaimed and any corrupt officials would be unmasked.

The first plot, covering 15 rai, was issued with a title deed this year. An initial investigation showed a Sor Khor 1 land occupation document was used to apply for the papers for the plot. However, details of the plot in the Sor Khor 1 document were different from what officials had seen. The document stated the land was near paddy fields, but the real plot was on a hill. The plot, if sold, could fetch about 200 million baht, said the source.

The second plot was issued with a Nor Sor 3 Kor land ownership document. Two Sor Khor 1 documents, one for eight rai and another for 19 rai, were used to apply for a land ownership paper, but the ownership document had been issued for a seafront plot of 33 rai, instead of 27 rai as stated on the application. Six rai of the 33-rai plot was found to be part of Kamala forest reserve, said the source. The land was priced at 200 million baht per rai.

In the third plot, a Nor Sor 3 Kor land ownership document had been issued for a seafront plot of seven rai in 1997. However, a Sor Khor 1 occupation document that had been used to apply for the ownership paper did not mention the plot was near the sea.  A title deed is being applied for this plot, said the source. The land would be priced at 200 million baht per rai.

The fourth plot, covering 21 rai in Kamala, was issued with an ownership document. However, a document used in the application stated the plot was in tambon Patong, covering four rai. A seafront hotel is under construction on the site, which could be sold for at least 4 billion baht, said the source.

The ministry will work with the PACC, the National Anti-Corruption Commission and the Department of Special Investigation to probe the land scam.

The Royal Forest Department (RFD) will launch an investigation into the illegal acquisition of land in the three southern provinces of Phuket, Phang-Nga and Krabi after it discovered that more than 2,800 rai of forest reserve areas had been encroached upon over the past two years.

The move comes after the department recently discovered that about 65 rai of forest reserve areas in Phuket's Freedom Beach, worth Bt4 billion, had been taken over by wealthy people.
Samak Donnapee, chief of the department's Forest Land Management Bureau, said encroachment into forest reserves had been rising drastically over the past two years due mainly to the booming tourism industry and the rising price of agricultural products in Phuket, Phang-Nga and Krabi. Since 2010, about 2,848 rai of forest reserve land in Krabi, Phuket and Phang-Nga have been invaded.

"A lot of resorts and rubber plantation were found set up in these areas," Samak said.

The department will also investigate land title deeds and ownership documents issued in the past three years to see what entitles them to occupy forest reserves.

"We found that there were abnormalities in the issuance of land title deeds over the past few years," Samak said, adding that title deeds had been issued for most of the forest reserve areas.

"If we find that the so-called ownership is illegal, we will immediately arrest the people and demolish all structures built in the forest reserves," he said.

Recently, the department found that wealthy people were encroaching into about 547 rai in the Ao Nang-Hang Nak forest reserve areas in Krabi.

"We found that one man was behind all this. He usually asks local officials to issue title deeds for his land, before he sells the land off to other wealthy people," Samak said.

In addition, he said that several of the new landowners had visited his office to seek interpretation of the aerial images captured of their land. They also asked officials to issue documents saying that their land was not located in forest reserves.

The department also found that there was an abnormality in the interpretation of the aerial images. It was discovered that some of the interpretations of aerial images of encroached land in Phuket's Freedom Beach, Phang-Nga's Koh Yao Island, and Prachuap Khiri Khan's Mae Ram Phung Beach had been done by one person. In reality, these aerial images need to be interpreted by a group of experts from the committee set up to solve problems with encroachment.

"Distorted interpretations might benefit rich people who want to own land in forest reserves," Samak said.