A Thai divorce formally terminate a marriage and is the legal ending of a marriage.

DIVORCE IN THAILAND means the dissolution of a marriage by the judgment of a court on one of the 12 grounds for divorce as listed in Section 1516 of the Civil and Commercial Code or by the Amphur (local municipality office) in Thailand upon a joint request and mutual consent by husband and wife. The Amphur or Amphoe is the district government administrative office (in Bangkok these offices are also called ‘Khet’). The district offices are responsible for marriage registrations and have the authority to again dissolve a marriage in case of a divorce on mutual consent.

Grounds of action for divorce for a judgment of a court are as follows:

Divorce in Thailand on mutual consent

The above grounds for divorce do not have to be proven in a divorce on mutual consent by the Amphur District Office. A divorce before the Amphur in Thailand requires agreement to divorce between both spouses and agreement on the division of marital or jointly owned assets, custody of children and, if any, how much alimony will be paid. A prenuptial agreement could be helpful in negotiating a settlement as the prenuptial states the parties intentions in the event of a divorce at the time of marriage.

If no agreeable solution can be found on these matter between the parties each party can file a petition (only on the grounds given in the Civil and Commercial Code) for the dissolution of the marriage by the court and the court will decide for them on these matters according to Thai law and individual circumstances. If a prenuptial agreement has been made the court will assess the validity and enforceability of its content.

Section 1465 Civil and Commercial Code: 'Any clause in the prenuptial agreement contrary to public order or good morals, or provided that the relations between them as regards such properties are to be governed by foreign law shall be void' - read more...

If both parties agree on the terms of the divorce (mutual consent) the procedure at the local Amphur will be shorter, less expensive and less time consuming. No direct Thai lawyer representation is required, but a divorce settlement agreement could be pre-drawn up, but not necessarily. Parties must agree on all types of potential issues such as division of properties, spousal maintenance and child custody. 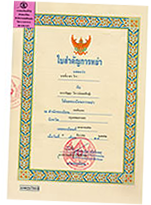 It is not required that the parties request a divorce at the same location where the marriage is registered, but both husband and wife must be personally present when filing for a divorce on mutual consent at the Amphur.

A contested divorce, i.e. dissolution of the marriage by the judgment of the court in Thailand, will take considerably more time, money and requires several court appearances and representation of a Thai lawyer.

Prenup
marriage laws
Downloadable prenuptial contract (th-en) for a marriage between a foreign and Thai national
Marriage
family law
Thai marriage laws are primarily codified in the Civil Code.
Divorce
marriage laws
The process of ending a marriage can be found in divorce laws section 1501 to 1535.

Common legal Q and A for expats in Thailand

Foreign real estate ownership
condo ownership
Can a foreigner buy a condo under a Thai company name, legal or recommended?
Thailand prenuptial agreement
prenup
Where to make my prenup, here as a Thai prenuptial or in my home country?
Thailand divorce
marital home
Is the marital home in Thailand common property between husband and wife?