Building and Buying a House in Thailand 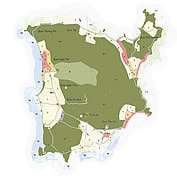 BUILDING LEGAL OWNERSHIP OF A HOLIDAY HOME IN THAILAND

Construction in Thailand is mainly regulated by the Building Control Act and the Town and City Planning Act. The Building Control Act provides for governmental control of virtually all types of construction by means of various applications and punishment in case of violation, the Town and City Planning Act deals with the permissible uses of land in different zones. In addition there are under both Acts Ministerial Regulations specifying regulations and zone restrictions. Building and construction can also be restricted by environmental and other laws (Nature Reserve Act, Forest Act, etc.) or if the land is burdened with a right of servitude. The relation between a customer/ employer and a builder in Thailand is primarily governed by a construction contract and the Civil and Commercial Code (specifically the chapter 'hire of work').

In addition to the zone regulations (12) for Samui specifying the type of use to which land/ property may be put in specific areas issued under the City Planning Act there are general building zone regulations (4) issued under the Building Control Act, giving standard building requirements and restrictions depending on its distance from the beach. These restrictions relate to the maximum size, distance to the land border, design and the height of the building (sample). Similar building regulations exist in Phuket, Pattaya, Koh Phangan, Hua Hin, etc..

Building or buying a home in Thailand

Foreign land ownership restrictions in Thailand relates to land only, not to the building on the land or condominium registered under the Condominium Act. The land and any structure on the land can be owned independently by different persons. Foreigners buying a home in Thailand can lease land (and optional obtain a right of superficies) and own the house as a personal property. In any land leasehold structure it is recommended to obtain ownership over the house, but ownership over the land remains the higher absolute right and the right to own the house on the land is relative to the right to use the land. The right to own the house on another man's land always follows the term of the land lease or superficies agreement and cannot exceed a term of 30 years after which the lease and/or superficies must be renewed.

Buildings (apart from condo apartments) do not have a separate ownership title deed document. The procedure to obtain ownership of a structure separate from the land is as follows:

The sale of an existing house separate from the land (land lease combined with house sale/ ownership) must be registered with the local land office (the Samui, Phuket, Hua-Hin, Bangkok or any other local Land Department's branch office) to be complete and property ownership transfer fees and taxes must be paid. Local property developers (in Samui) tend to offer a sale and purchase agreement for the house but skip the official transfer procedure (ownership has not transferred), or lease land and house (not recommended). The transfer of ownership of a building will take at least 30 days from the first visit to the land office to the issuance of the sale of a structure document (sample right or view sale document with short translation). The official land office sale document, stamped and signed by the local land office, is the document that proofs the purchaser's rights to the house and completes the transfer. Required documents:

Research by the Agency for Real Estate Affairs indicates the new city plan for Koh Samui will mandate that property projects cannot be constructed higher than 150 meters above sea level read more.... Similar to Phuket where the Ministry of Natural Resource and Environment issued a notification to protect the environment in Phuket prohibiting any building and renovation in the area 80 meters and more above the average sea level. Construction is not allowed even though the land could have a full land title deed.

(also for leasehold land for foreigners) 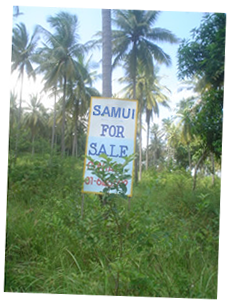 The above zoning areas are issued under the Building Control Act specifying what you can build. Different zones under the City Planning Act can be found in the city planning act map controlling land and property use in specific areas. The main aim under the Town and City Planning Act for Samui is to set rules for sustainable development of Samui and protect Samui's environment, however it has always been relatively simple and common practice for developers to circumvent the land allocation rules, housing development license requirements and environmental control regulations. Investigations in Samui showed that a majority of the developers in Samui violated the Land Department's land allocation rules.

Section 4 (Land Allocation Act): 'Land Allocation refers to the sale of plot of land that has been divided into 10 plots upwards with property or other remuneration in return regardless whether it is divided from one or many adjacent plots. It also refers to the execution that the land has been divided less than 10 plots and thereafter, within 3 years, it has been divided in total into 10 plots onwards'.
Section 21 (Land Allocation Act): 'Land allocation shall be prohibited unless the approval by the committee. The procedure for application and issuance of license shall be in accordance with regulation, method and conditions specified in Ministerial Regulation'.

- An initial probe into a land scandal in Phuket found ownership documents and title deeds for four plots in Kathu district had been unlawfully issued by corrupt officials read more...
- Forest land is classified as government property under the Ministry of Natural Resources and Environment and cannot be owned by any private entity. Due to uncontrolled development and corruption in the past Samui has many illegally issued land ownership titles in these areas that may be corrected or revoked and returned to the state. More complaints of land encroachment in different areas read more..
- Investigations showed that the majority of the developers in Samui advertising property in magazines and on websites were not licensed to do business and had violated the Land Department's land allocation regulations. As a result land titles are dodgy and the status of the land NOT protected by land allocation laws or general development regulations. Foreigners have been warned they risk losing all and may face legal problems later read more...
- Following a series of inspection trips around the Samui Khun Tingchai Rochanaknan form the Department of Natural Resources and Environment recently said that because of continued uncontrolled development, Samui in once again in great danger of flash floods and landslides this year read more...
- Samui property sales in problem, sales in Pattaya, Phuket also slow. Sales Pattaya, Phuket and Koh Samui drop. Samui market in dire straits read more... 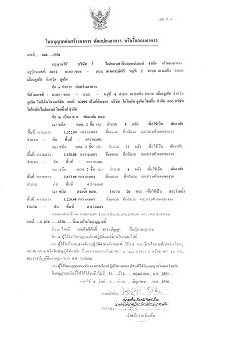 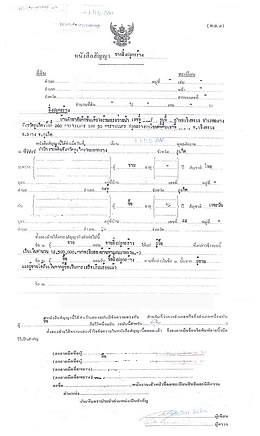