Thai marriage and contracts between husband and wife

Freedom of contract in a Thai marriage

Agreements between husband and wife in Thailand

Under Thai marriage laws any agreement between husband and wife entered into during the marriage can be voided by either of them at any time during the marriage or within one year from the final divorce. For this reason only a prenuptial agreement between husband and wife is under Thai law a valid contract if made pre-marriage and registered in the marriage register at the time of marriage, but it is a void contract if made post-nuptial (section 1466).

This is not typical for Thailand and in many jurisdictions around the world there is limited freedom between spouses to make agreements affecting their personal assets or their relationship during the course of the marriage. Sometimes there are specific restrictions in the law (for example restrictions on employment contracts between husband and wife) or in general agreements between spouses are valid agreements but they can be voided based on undue influence (would the other spouse have entered into such contract and upon such terms and conditions if he or she was not their spouse at that time?). A contract between spouses entered into during the marriage that would benefit one party more than the other could be set aside on the grounds of the presumption of undue influence (contrary actual undue influence).

Contracts in a Thai marriage

Thai marriage laws recognize the special relationship between husband and wife in section 1469 of the Civil and Commercial Code and gives both spouses the right (without grounds) to void any agreement concluded between them during marriage. This means for example that any agreement affecting their personal or marital assets agreed between the spouse during the marriage can be voided, or as the Civil and Commercial Code states:

'Any agreement concluded between husband and wife during marriage may be avoided by either of them at any time during marriage or within one year from the day of dissolution of marriage; provided that the right of third persons acting in good faith is not affected thereby'.

This also means that if a Thai spouse has accepted property as a gift from the personal property of the foreign spouse who in return is given a right of usufruct over the property, both the gift and the usufruct could in theory be voided by either spouse (if concluded during marriage). The return of the property shall be governed by the chapter 'undue enrichment' (sections 406-419 Civil and Commercial Code). This also means that when real estate property is registered on the name of a Thai spouse it does in a divorce not automatically mean that she gets to keep it all. Often it is much more complicated but a usufruct contract between husband and wife may not offer the often expected straight forward protection for the foreign spouse.

Divorce in Thailand can be on mutual consent, or on the grounds for divorce by court judgment as listed under section 1516 of the Civil and Commercial Code. 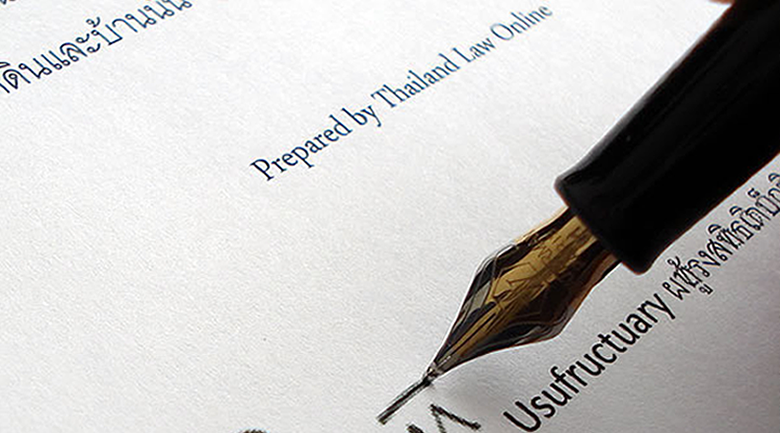 Prenup
marriage laws
Downloadable prenuptial contract (th-en) for a marriage between a foreign and Thai national
Marriage
family law
Thai marriage laws are primarily codified in the Civil Code.
Divorce
marriage laws
The process of ending a marriage can be found in divorce laws section 1501 to 1535.