THE LAND CODE AMENDMENT ACT (NO.8) 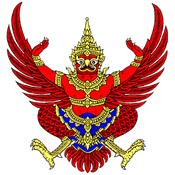 Being the 54 th year of the Present Reign

His Majesty King Bhumibol Adulyadej has been graciously pleased to proclaim that:

Whereas it is expedient to amend the Land Code Act;

BE IT THEREFORE BY THE KING, by and with the advice and consent of the National Assembly, as follows:

Section 2. This Act shall come into force as from the day following the date of its publication in the Government Gazette.

Section 3. The following statement inclusively as Section 96 bis and Section 96 tri in Chapter 8 “Limitation of Right in Land of Aliens (Foreigners)” of the Land Code.

Section 96 bis. The provisions of a foreigner who may acquire land by virtue of the provision of a treaty under Section 86 paragraph one shall not apply to alien who bring money to invest as amount specified in the Ministerial Regulation which not less than forty million baht. Thus, an the foreigner (alien) shall acquire the land for residence not more than one rai and shall obtain permission from the Minister.

The acquisition of land of a foreigner in paragraph one shall be in accordance with the rules, procedures and conditions prescribed in the Ministerial Regulation in which shall contain at least the following essential matters:

(1) The type of business invested by an alien shall be beneficial to the economic and social of the country or shall be eligible to obtain the promotion of investment pursuant to the Investment Promotion Law as declared by the Board of Investment.
(2) The investment period needs to be maintained not less than three years.
(3) The location of land permitted for acquisition shall not beyond the confines of Bangkok , Pattaya, Municipality of land specified for residence purpose provided by the law of Town and Country Planning.

Section 96 tri. As alien who obtained permission to acquire land under Section 96 bis and does not comply with the rule or conditions prescribed in the Ministerial Regulation Section 96 bis paragraph two shall have to dispose of the land owned by him within the period of not less than one hundred and eighty days and not more than one year as specified by the Director General. The Director General shall have the power to dispose of such land when the time limit elapses.

A foreigner (alien) who obtained permission to acquire land under Section 96 bis and does not use it for residence within two years from the date of acquisition registration, the Director General shall have the power to dispose of such land.

Requirements to be granted the right to acquire 1 Rai with permission of the Minister of Interior: the land to be purchased shall be not more than 1 rai in area, and the following rules and conditions must be met:

The Acquisition of Land for Residential Purpose by Aliens

An alien bringing money not less than Baht forty million as specified in the Ministerial Regulation into the Kingdom for investment may apply for acquisition of land for residential purpose not more than one rai in area, provided also that permission must be obtained from the Minister. Under section 96 bis of the Land Code, the application for such acquisition of land shall be in accordance with rules, procedures and conditions prescribed in the Ministerial Regulation as follows:

1. In the case of an alien, who brings money for investment and wishes to apply for permission to acquire land for residential purpose, shall lodge an application (Alien 4 Form) to the competent official under section 71 of the Land Code together with the following documents:

2. A person who is granted permission shall maintain the investment period not less than five years. He/she is required to produce the evidence of possession in the investment in 1.2 as the case may be as current, which shall be not less than Baht forty million, to the competent official according to section 71 once a year, on five consecutive years and each year shall be no later than the date making the acquisition registration of the aforementioned land.

3. A person who is granted permission shall utilized such land for a residential purpose of his/herself and the family in a way that is not contrary to the local custom or good living of the local community.

4. A person who is granted permission shall inform such land utilization for a residential purpose to the competent official of land office according to section 71 within sixty days as from the date of utilization.

6. If a person granted permission withdraws an investment in the business or activity before the due date of investment in 2, he/she shall inform in writing to the competent official according to section 71 within sixty days as from the date of making the withdrawal.

7. A person granted permission shall utilize such land for residential purpose within two years as from the date of the land acquisition registration.

9. Any foreign language document shall be translated into Thai language. The translation shall be certified according to the Ministerial Regulations (B.E. 2540) issued under the Purview of Administrative Procedure Act B.E. 2539. (Phraratchabunyat Vithipratibut Ratchakarn Thangpokkhrong B.E. 2539)

10. In the case of a person bringing money into the Kingdom to the amount of Baht forty million for investment and has bought the land less than 1 rai , if later and within the period of investment, that person wishes to buy additional land, in this instance, the documents attached to the current investment can be used along with the application for acquisition of the additional land.

Note: English translations of the original Thai law texts are prepared for reference purposes only. Only the Thai script versions, as published in the royal Thai government gazette (ราชกิจจานุเบกษา), shall have legal force in Thailand.